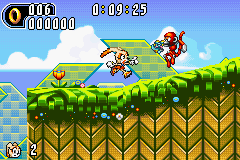 Cream using the Chao Attack on a Mon in Sonic Advance 2.

The Chao Attack was first introduced in Cream's debut game, Sonic Advance 2. By pressing the

button, Cheese will automatically attack and destroy the nearest enemy. He can also be used to grab Item Boxes. The Chao Attack will also work during any Eggman boss, making it possible to defeat the doctor without ever touching him. This makes Cream the easiest character to play as in the game. If there is no enemy around to attack, Cheese will look around curiously and do nothing. Cheese has a short cooldown period after a successful attack - if Cream uses him during this cooldown, he will complain about it and refuse to attack.

Cream can also use the Chao Attack in Sonic Heroes. When she is alone, she can send Cheese to attack enemies (though it is extremely rare that she will be in such a situation). The Chao Attack is the slowest of the Fly Type characters' solo moves but it is the most deadly. While other solo moves merely stun the enemy, the Chao Attack will destroy on contact. It is also very useful if Cream is the only character left during Team Battles, knocking the opposing team off the stage.

The Chao Attack has many different variants in Sonic Battle that compose most of Cream's moveset. Cream can even use Cheese to create tornadoes.

Sonic Advance 3 is one of the few games where characters beside Cream can use the Chao Attack. Not only does she use it herself, but if she is partnered with another character, they can also use Chao Attack by performing a Tag Action with her. During which, Cheese takes on the appearance of whoever Cream's partner is and does whatever they tell him to do.