Not to be confused with Night Carnival Zone from Sonic Rush.

Carnival Night Zone lives up to its name—it's a theme park! This colourful Zone follows many of the common tropes of carnival/casino-themed levels such as bumpers, except that there are many more hidden areas than in other Zones and a few more toys. Classic carnival-themed gimmicks include the cannon, which will launch the player in the direction of their choice, and balloons that can be used to give the player an extra bounce. Of course, the more stranger contraptions include anti-gravity pads, magnetic propulsion tubes and elevator shafts, platforms that sink when stood on and rise when jumped off of, long striped poles to run down on, spinning cylinders to grab on to, black wheels to get dizzy on, and the unforgettable rotating barrels; note that not all barrels move very far. This Zone is also one of the longest in the game for Sonic and Tails, but for Knuckles it's one of the shortest due to his short routes, with each Act taking about 1 minute and 30 seconds for the echidna to complete.

Act 2 features areas submerged in pink water, with the player's only air source besides the Water Shield being air bubbles found by popping balloons underwater. Partway through Act 2, Sonic and Tails will encounter Knuckles, who will attempt to impede the heroes' progress by switching off the power all over the Zone, casting it in darkness, as well as flooding the next section with water which drains as the player makes their way down the section. Besides the raised water level, the lights being switched off has no other effect on gameplay. Later on, the player will find a button that turns the lights back on for the remainder of the Act. After a long series of high-speed tunnels, Knuckles will appear again to activate a long elevator shaft that sends the heroes to the Graviton Mobile. At the end of the Zone, Sonic and Tails are launched out of a cannon to IceCap Zone.

When playing as Knuckles, there is no water for the echidna to worry about, allowing him to take a shorter route through Act 2, though it's possible for him to take Sonic/Tails' route if he jumps just before running down the pole at the beginning of the Act. It is interesting to note that Knuckles does not fight a boss at the end of Act 2. After reaching the end of his route, the echidna will find an unguarded Capsule, immediately ending the Act, then he will use a teleporter to proceed to IceCap Zone. This is one of the only three levels where Knuckles does not fight a boss to advance to the next Zone (the other two being Lava Reef Zone Act 2 and Hidden Palace Zone). If he took Sonic's route, there will be no Capsule, meaning he will not be able to complete the Act; however, he can climb up the shaft and fight the Graviton Mobile, clearing the Zone that way and leading to an inconsistent transition to IceCap Zone.

This is one of very few Zones in Sonic 3 and Sonic & Knuckles combined where the Lightning Shield can protect the player against attacks of its element (the other being Death Egg Zone), as it will make the player immune to the Sparkle's projectiles and the electromagnetism from the Graviton Mobile. Strangely, it will not protect the player from the Bowling Spin's electrical surge. Due to the lack of fire-based hazards, the Fire Shield isn't very useful here.

The "Barrel of Doom" 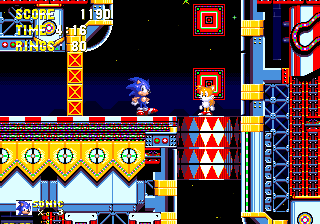 The "Barrel of Doom".

Carnival Night Zone is infamous among Sonic 3 players for a certain design choice in its second Act.

Near the end of the level, after the player has turned the power back on to the Zone, Sonic and Tails will run into a tall room with a barrel blocking a gap in the floor. A door will shut behind them, and it's up to Sonic and Tails to get out of the room before they run out of time. Jumping on the barrel makes it wobble, but no matter how high Sonic and Tails jump, or how they time their jumps, the barrel does not move enough to allow a safe exit. It's not immediately obvious what to do next, and becoming colloquially known as the "Barrel of Doom" among players of Sonic 3. For the younger demographic less adept at puzzle solving, Carnival Night Zone Act 2 was often as far as they could reach—it was a regular question posed to gaming magazines of the time, and presumably Sega themselves.

There are many barrels in this Zone—some behave similarly to this one, others move on a fixed path and can crush the player. Until this point in the game, simply treating the barrels as obstacles and avoiding them works as good tactic, but the player can't do that here—it needs to be moved by the player. This is achieved by standing on the barrel and pressing

to shift its weight. The player can use this momentum either to reach high places, or in this case, get through the gap. Carnival Night Zone is the only level in the Mega Drive series to feature an obstacle like this, and stands as the only situation where pressing

is required to beat the game. There are no visual clues to suggest the D-Pad is needed, no hints in the manual, and even if the directions are pressed accidentally, their effects are not noticed until the player commits to the up-down-up-down pattern.

When playing Sonic the Hedgehog 3 & Knuckles, Knuckles (usually) takes a different path to Sonic and Tails through Act 2, and thus he does not visit this room.

Sega has officially poked fun at this barrel and its problems it has caused since 1994. It appears in Lego Dimensions as the "barrel of doom" and is destroyed by E-123 Omega in issue #67 of Sonic Universe. It was also immortalised in drinking mug form in 2019[5], and Yuji Naka has publicly apologised for its inclusion in the game.[6]

In the Sonic the Comic series, Carnival Night Zone was built on the Floating Island by the Marxio Brothers as a means of helping Dr. Robotnik turn up profits to fund his dictatorship of Mobius. At first, the Marxio Brothers trick Knuckles into thinking Robotnik isn't involved and that he would receive a cut of the park's revenue to refurbish the Floating Island's monuments, and even treated him to a ride on a roller coaster designed to kill its passengers, though the echidna survives thinking the death traps were part of the experience. When Chicio accidentally reveals the Brothers' allegiance to Robotnik, Knuckles breaks the Carnival Night Zone off from the island by punching a fault line, causing it to fall and crash-land in the Emerald Hill Zone.

In issue #67 of the Sonic Universe comics by Archie Comics, Team Dark and a Tele-Pod controlled by Snively cut through various Zones on Angel Island in order to reach the Master Emerald before Eclipse the Darkling does, including this Zone. E-123 Omega is depicted destroying the "Barrel of Doom" with his weaponry.