This boss reappears in Knuckles' Act 1 of Sonic Mania's Mirage Saloon Zone, as an exclusive mini-boss for the echidna. 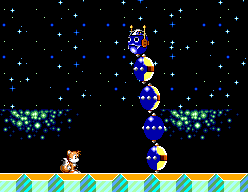 A four-ball fight in the Master System version.

The Bead Worm rises up in the beginning, sways back and forth, launches its segments at the player, and then replaces them to begin the cycle anew. The first and third segments are thrown diagonally into the air, bouncing off the ground, while the second segment is launched horizontally on the ground. Luckily, the head's top is weak, and so the player can destroy the boss by jumping at it and landing squarely on the top of its head. It'll throw its bottom-most body segment in the air, so they must stay on the ground when attacking.

The difficulty of the Bead Worm is determined by three horizontal tubes Sonic and Tails must travel through just before the boss area. Taking the top tube presents an easy challenge, the middle tube a medium one, and the bottom tube, hard: